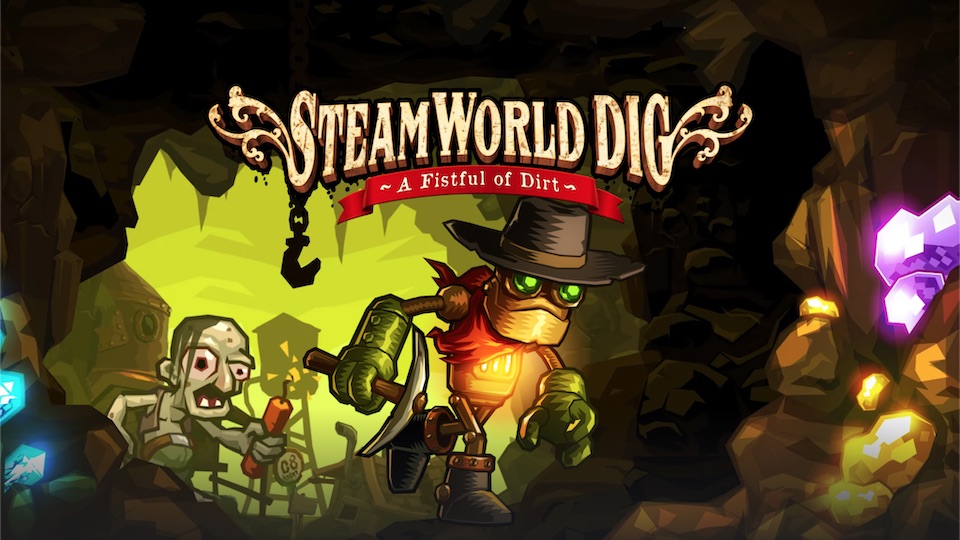 SteamWorld Dig is a platform mining adventure with strong Metroidvanian influences. Take the role of Rusty, a lone mining steambot, as he arrives at an old mining town in great need. Dig your way through the old earth, gaining riches while uncovering the ancient threat that lurks below…

Oh, to recall high school AutoCAD class, a respite from the academic grind and an oasis for online flash games! I played countless games during those days – many a welcome temporary distraction lost amongst a few unforgettable gems.

This playfully familiar indie game evokes such nostalgia. No, it was not a game I once played, but rather a descent into the cavernous mine of gaming memories, fittingly spelunking within the archives of leisurely recollections.

Disclaimer — this review is a result of my biased first impression after surveying four hours of reminiscent gameplay and should be taken lightly.

SteamWorld Dig is a fun indie game of familiar mechanics. Carried along by a fitting story of a steam powered robot digging for answers in a newly inherited mine, the gameplay feels of a simplified Spelunky or Terraria, built upon the objective of mining for progressively more valuable resources in exchange for items to aid a gradually complex and perilous descent. SteamWorld Dig, although lacking substantial depth, is a solid and enjoyable experience of casual gaming.

Engaging and fun, but with room for improvement.

Uses arrow keys over w, a, s, d keys for movement and doesn’t use the mouse at all, resulting in unintuitive controls.

Fairly easy, and beatable in a sitting or two, but not entirely trivial.

The gameplay is effectively built around item and difficulty progression, which does well.

It’s a playful story of a steam-robot (steambot) inheriting a mining town, written to drive the gameplay.

The steambots engage in cute dialog, build some character, and have a little back story to carry them along.

The mine progresses in difficulty and complexity as you descend deeper, driving much of the gameplay as well as the story.

The story progresses purely for the gameplay, and it wraps up in a familiar and predictable fashion, yet it works and is enjoyable.

Indie production, through and through, with nothing too exceptional nor detrimental. It’s an overall good effort to be built off of.

It’s there and it works, but it’s not a bop and it doesn’t slap.

Fine. Didn’t wow me and didn’t bother me.

Recommend?
It’s worth a play through.

Replay?
Probably not, unless you count the sequel.