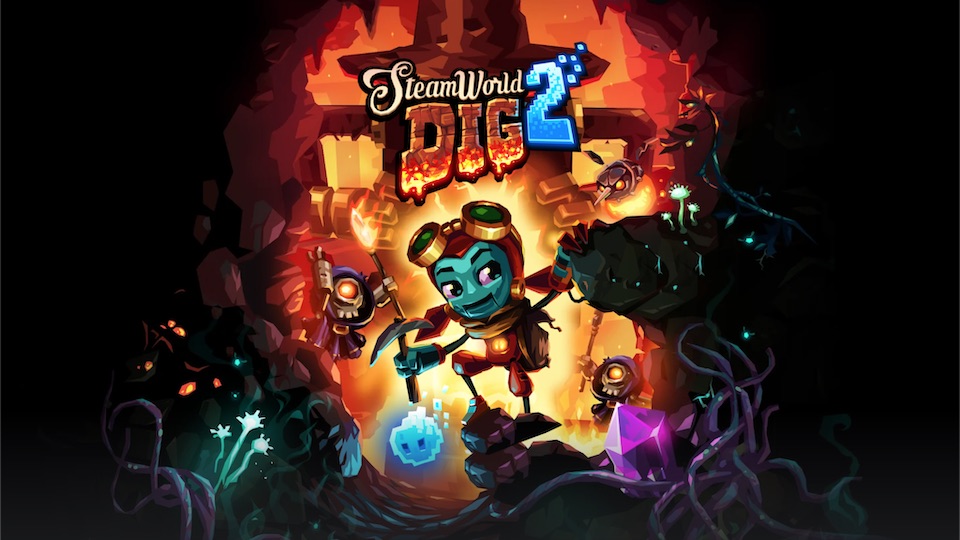 SteamWorld Dig 2 takes you on a platform mining adventure forged in Metroidvania flames. When an old trading town is struck by mysterious earthquakes, it’s up to a lone steambot and her unlikely companion to uncover what trembling terrors lie beneath.

In healthy competition and comparison, shall we praise the champion or the most improved? Surely we should honor both, as the skill of an expert virtuoso and the growth of a young contender are uniquely admirable traits to behold.

This polished iteration of an already successful game boasts lovely improvement. Bravo, young franchise, for I am both delighted and inspired to admire your potential exceeded, and I look forward to your future work.

Disclaimer — this review is a result of my biased first impression after delighting four hours of inspired gameplay and should be taken lightly.

SteamWorld Dig 2 is an expert refinement of its predecessor. Following the core design of SteamWorld Dig – the feedback cycle of exchanging progressively more valuable resources for improved gear to continually procure even more valuable yet precariously and perilously placed resources – the game continues the story of the first, with more breadth and depth, boasting improved production throughout. SteamWorld Dig 2, like that of its steambots within, keeps the good parts, scraps the bad, and upgrades and polishes for a beautiful amalgamated shine.

A refinement of a successful formula that engages throughout.

One of my few complaints, but the choice to continue with the previous game’s backwards controls is a shame. It’s an understandably tough design decision, as in keeping them yields consistency and cohesion. Also, this game does a better job introducing the controls which justifiably are just the default settings and can always be remapped.

They tuned up the base difficulty while maintaining a clean progression, achieving an overall enjoyably challenging experience.

Progress through the game with increasingly powerful items and skills, yet through increasing difficulty of control and precision. It’s the core mechanic, and it plays quite well.

The story picks up where the last one ends, and this time with more depth of character, setting, and overall intrigue.

A lovely new cast of characters to complement a few of the original. How can you go wrong with the perfectly named workbench technician, Turtle Bucket?

Have I ever mentioned that I’m a big map guy? Love the map and the overall setting. The levels no longer just progress the gameplay, but simultaneously evolve the story beautifully.

It’s just wonderful, really. The story is once again designed to aid the gameplay, but it actually comes alive and progresses along through the setting and the characters much more cohesively than in the previous title.

Hats off to the production studio Image & Form. Built off of their success from the first game; improved in almost every facet of game design. Quite inspiring.

Beats are a bop, songs slap. One track in particular sounds eerily similar to music in Diablo II.

Finely designed. Did wow me.

Recommend?
Yes, especially if you played the original.

Replay?
I definitely want to finish it, and I may even return for another play through.

Joy?
I’ve upgraded my face with a smile.