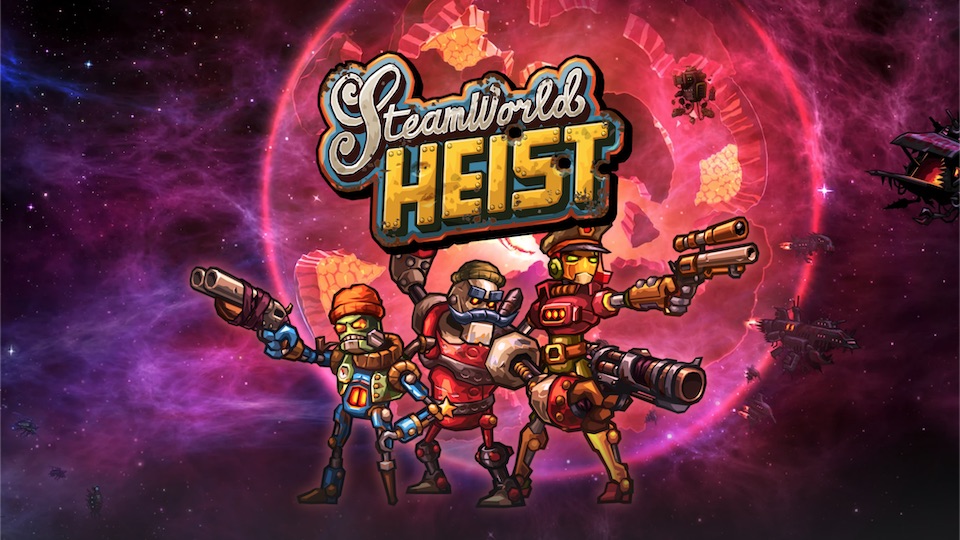 In SteamWorld Heist, you command a steam-driven pirate crew in a series of epic tactical shootouts. It’s turn-based strategy with a twist: You manually aim the guns of your robots, allowing for insane skill shots and bullet-bouncing action! As the captain you will board, loot and shoot your way through enemy spaceships. Overcome the challenges of the vast frontier by upgrading your recruits with unique abilities, weapons – and even stylish hats!

Ever long for the adrenaline fueled rush of a proper heist, but remain civil in fear of the consequences? Personally I thank Tarantino’s Reservoir Dogs for imprinting macabre possibilities of the latter firmly within my imagination.

This lighthearted game offers forgivable forays of the former. I am ready to enter the fray – Reservoir Bots? Nay, steambots don’t bleed, can be rebuilt, and at worst scrapped for parts – Tarantino shall not put me off from this!

Disclaimer — this review is a result of my biased first impression after piloting four hours of strategic gameplay and should be taken lightly.

SteamWorld Heist is a refreshingly unique spin on the SteamWorld Dig franchise. The game utilizes turn-based missions to employ a healthy combination of tactics and timing mechanics for an enjoyable experience that compels through engaging story and a simple feedback reward system – loot enemy spaceships for better weapons and items; level up characters, gaining improved skills and new abilities; expand your crew with new unlockable steambots to command. SteamWorld Heist certainly contains an informant, as it attempts and fails to steal away countless hours, but rather exchanges them with ship-loads of fun.

Casual and exciting, with loads of replayability.

Adjustable at the start of every mission. The middle difficulty, of which I played on as recommended for the average gamer, feels too easy.

The progression is excellent, as each mission builds upon the last, driving gameplay and compelling you along.

With a cast of growing characters, the space-pirate crew of steambots are a lighthearted bunch that tell an engaging story from the beginning. It’s the perfect medium to practice voice-acting.

Unique and charming, the beloved steambots, despite their flaws, are the stars of this enterprise.

The setting does well for the story, but the variety is lacking. I suppose interior design has yet to influence spaceships.

The pacing is correct, and flows well with the turn-based style gameplay, accordingly nudging the missions along.

Pops off in moments, particularly when entering friendly space-bars equipped with their own jukebox or employing a steambot live band.

An excellent progression from the earlier titles in the franchise. Polished and effective.

Recommend?
Yes, even for those who tend to eschew turn-based games.

Joy?
Loads of it, despite my embarrassing efforts at voice acting the story.