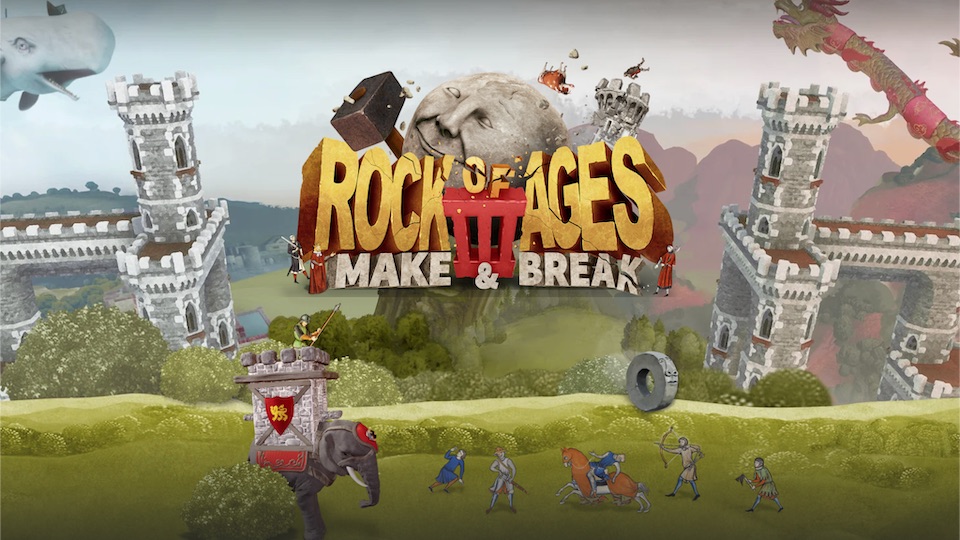 Rock of Ages 3: Make & Break is competitive tower defense and arcade action rolled up with ACE Team’s quirky, Monty Python-esque humor into one giant, creative game for the ages.

Does anyone here dislike history? It was the question that my 10th grade history teacher posed to the room on our first day of class, and to which I promptly and eagerly raised my hand to in confirmation.

This quirky game uses history for its story line. Shame, really, I thought history may grow on me with age, rather it appears to be cementing me into its very fabric.

Disclaimer — this review is a result of my biased first impression after recording a few hours of antiquated gameplay and should be taken lightly.

Rock of Ages 3 is a creative tower defense arcade style game, with a spin. The game tasks the player to construct a tower defense, and consequently, borrowing game mechanics from Super Monkey Ball, offers the player a chance to spring an attack by rolling a boulder at the opponent’s encampment, ultimately imposing a race of destruction between the two contenders. Rock of Ages 3 flips the script on tower defense style games, imagining something unique that, unfortunately, feels a bit like the fate of Sisyphus.

Good enough to kill some time.

Fine. I’ll never understand the choice to use a different key over esc for pausing to a menu, in this case the p key.

The tutorial stumped me longer than it should. Poor onboarding. Maybe the difficulty is balanced once the game is understood, but frankly I never bothered to get to that point.

Appears to have a lot of challenges and different game modes, including online custom games. I think progression is a bait though, as the gameplay sort of blends into the same repetitive thing.

It plays on history and is supposedly funny. Didn’t do it for me.

Historical figures or something of the sort; they drive the story.

The levels feel similar, and seem to just depend on what you build with.

I’d rather sit in history class.

I’m clearly just missing something, or maybe I wasn’t in a good mood, because this is the third game in the series but I can’t fathom how or why.

Started to annoy me. Maybe enjoyable if you find the game enjoyable.

Joy?
A thing of the past.