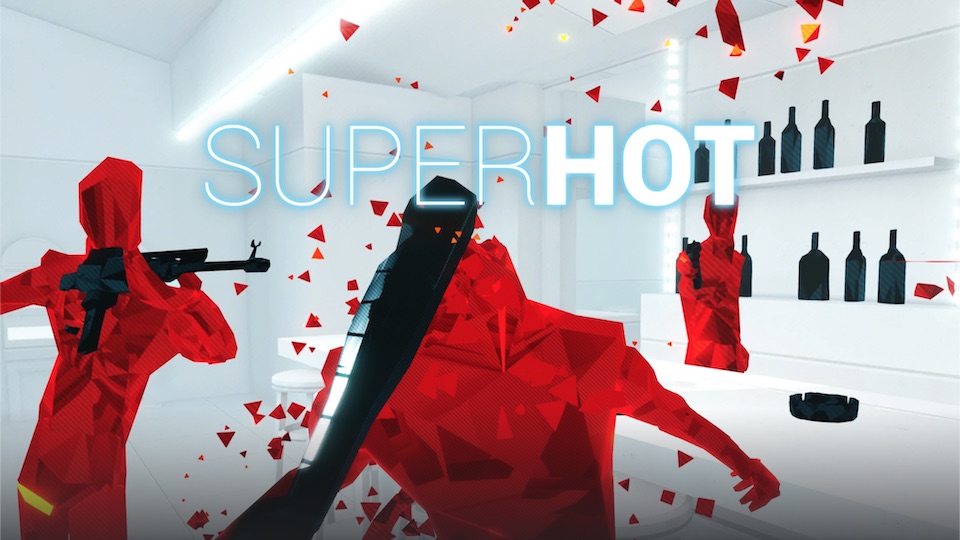 With its unique, stylized graphics SUPERHOT finally adds something new and disruptive to the FPS genre. SUPERHOT’s polished, minimalist visual language helps you concentrate on the most important - on the fluidity of gameplay and cinematic beauty of the fight. Blurring the lines between cautious strategy and unbridled mayhem, SUPERHOT is the FPS in which time moves only when you move. No regenerating health bars. No conveniently placed ammo drops. It’s just you, outnumbered and outgunned, grabbing the weapons of fallen enemies to shoot, slice, and maneuver through a hurricane of slow-motion bullets.

How is it, in life, that we become? Of that existential mystery I cannot answer, nor do I dare to presume, and yet, in reading this I bless you with a boon to become supah hawt.

This uniquely creative game may also be offering such grace. I can’t be certain, and please do not hold me accountable in either regard as experiences may vary, but there is only one way to find out…

Disclaimer — this review is a result of my biased first impression after propagating a few hours of viral gameplay and should be taken lightly.

SUPERHOT is a remarkably imaginative and courageous disruption of the FPS genre. Following a story that begins in the game menu – at a computer terminal – and gameplay that moves only with you, of dodging bullets and killing red enemies through an artistic lens like that of infrared night vision, the result is a beautifully interwoven experience that simultaneously holds your hand with overt commands and subconsciously reveals the virtual reality slowly enveloping the fabric of your very being. SUPERHOT, in challenging the wildly successful FPS status quo, is a self-referential ambiguity that invades and develops like a latent symptom until its presence is felt, acknowledged, and warmly regarded.

A marvelous fluidity and balance of chaos and control.

The game feels absolutely lovely to play, thanks in huge part to clean controls. One confusion, and my only complaint, is the mapping of the numpad keys to the post-level replay controls. Numpad keys are no longer ubiquitous to keyboards, and replay mode really begs for some control, exacerbating the issue.

The game feels easy, in some sense, as the main story can be finished in under four hours. I beat some levels on my first try, and others took way more attempts than I would like to admit, and yet that felt ok. Regardless, with respect to story pacing, the difficulty feels close to perfect, and I quite enjoyed it.

Gameplay progression complements the story in a masterfully self-referential experience of immersion. Unlockable endless mode and challenges give the game longevity and replayability even when the main story is over.

Like a clever mystery that tells you the resolution from the outset and yet confounds throughout.

There is no backstory, and I’m not sure who any of the characters really are, except of course for the player – for me, for you, for us.

The levels are wonderfully made for both story and gameplay. Sometimes they repeat from different perspectives, and somehow they help tell a story through subtle and unspoken design. Like a vivid dream, it’s simultaneously impossible to say where this game is truly set, yet while subconsciously remaining precisely where I know it to be.

At one point the story actually gets you to quit the game, like exit out entirely, just to progress. Totally meta, and frankly a testament to its commitment of immersion. In many ways the progression is the story itself.

It’s not Triple-A production, but it does wonderfully nonetheless, and arguably triumphs as a result.

The only music I remember is the track when the credits roll. Fortunately it claps (©abosante 2021).

There’s a menu item containing ascii art, which is really cool and thematic.

They aren’t polished or eloquently refined, and yet they belong.

Recommend?
Everyone should play this game, as it’s both lighthearted and penetrating.

Replay?
Honestly I’m not sure, as the experience felt just right. Definitely a speed runners dream game though.

Joy?
An effulgence of it.