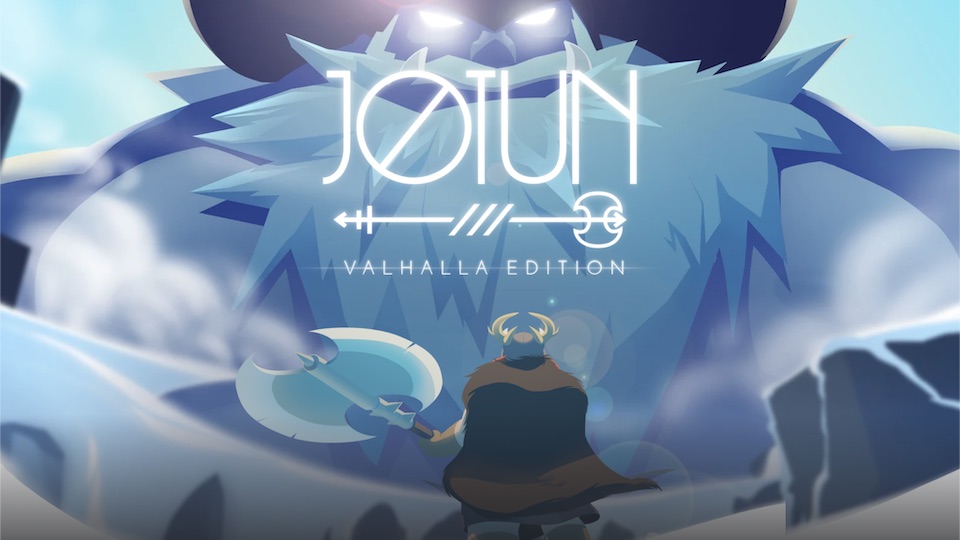 Jotun is a hand-drawn action-exploration game set in Norse mythology. In Jotun, you play Thora, a Viking warrior who died an inglorious death and must prove herself to the Gods to enter Valhalla. Explore vast regions of Norse Purgatory to find runes to unleash the jotun, giant Norse elementals. Fight them using only your massive two-handed axe, the blessings of the Gods and your skills! Impress the Gods!

Is there any effort more worthy than in pleasing the Gods? It’s a noble cause, indeed, and with respect to saving your soul it’s worth every effort, particularly in contrast to gratifying the masses, pacifying the critic, and silencing the mocker.

This divinely focused game centers around impressing the Nordic pantheon. I respect that it makes little effort in appeasing me – just pray that the gods are in fact delighted by the work.

Disclaimer — this review is a result of my biased first impression after battling four hours of disengaged gameplay and should be taken lightly.

Jotun is an action-exploration game that, in moments, plays through action or exploration, but rarely both in union. With beautiful hand-drawn characters and levels, set within the fascinating lore of Norse mythology, the gameplay disappoints as it lacks progression and yearns for more – more enemies, more complex attacks, more challenging puzzles, more. Jotun has the foundation of something brilliant, but the incomplete gameplay contributes to disengagement and a stale story that only breathes within the first inhale and final exhale of a dying boss.

Needed more. I wish the gameplay went in the direction of a combat hack-n-slash rather than in solving a confusing map puzzle.

Controls are fine, but too simple. So many unused keys – the people want more! Also, I wish the m button rather than the esc button opened the map, mostly because I want to throw shade towards the map experience.

So easy I lost focus, thereby making it a bit harder. Boss fights were fine; levels were a flop.

What progression? A few boons from the gods. Sure the boss fights maybe, but the levels… not it. I think the game needs combat combos, like whirlwind and slam attacks, oh, and mobs.

A good dose of Norse mythology, but I found myself disengaged and losing focus.

Bosses are intriguing, and beyond that – well there isn’t much beyond that.

The levels were unique and well-designed. They contributed to the story well, but they were missing mobs. Did I mention yet that the game needs mobs? Right, also what’s with the maps? They were only useful in hindsight.

I just wish they didn’t fire the developer who coded the mobs before he could merge his code. Seems like his buddy who developed the maps was also let go before release.

This game had music? I honestly can’t remember.

Lovely and well drawn. Bravo to the team or individual who at least gave the audience something to applaud.

Replay?
Maybe for the last two boss fights, to see if beating them opens up any more content or ends the game.