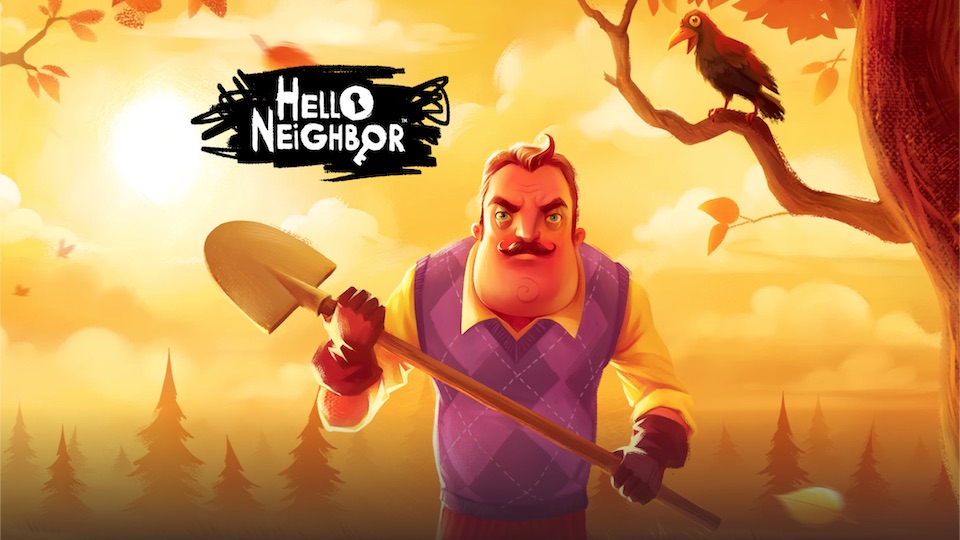 Hello Neighbor is a stealth horror game about sneaking into your neighbor’s house to figure out what horrible secrets he’s hiding in the basement. You play against an advanced AI that learns from your every move. Really enjoying climbing through that backyard window? Expect a bear trap there. Sneaking through the front door? There’ll be cameras there soon. Trying to escape? The Neighbor will find a shortcut and catch you.

What’s behind door number one? There is a strange desire in knowing what goes on within someone else’s home, the secrets they keep behind their walls, which interior designers they follow on social media, and what snacks they have in their fridge.

This curious game, heightened by a glimpse of intrigue, lets you explore that desire – but not without tension. The neighbor appears to be up to no good; hold my bowling ball, I’m going in.

Disclaimer — this review is a result of my biased first impression after investigating four hours of unusual gameplay and should be taken lightly.

Hello Neighbor is a puzzling game that conceptually contains the seed of brilliance but fails to deliver. The story and gameplay is built around the dichotomy of a recklessly curious child and a vigilantly creepy neighbor, where you as the former try to uncover the dark secrets of the latter – the learning and adapting AI. Theoretically promising, Hello Neighbor pioneers the basis of a novel game genre that should only benefit with future polish and iteration.

The concept of the learning AI is a nice attempt and a selling point. Overall though, it disappoints.

A failure. Clunky and confusing. Why have different controls for interact and use?

Exacerbated by poor controls, the game feels a bit too hard and frustrating.

The AI of the neighbor definitely improves, spicing up and progressing the gameplay. Too bad the gameplay falls short.

Strange, unsettling, and yet a bit compelling.

Creepy and athletic. Witness your neighbor fearlessly crash through his upper floor window and leap from the roof without hesitation or consequence.

The neighborhood is a waste and the boundaries make no sense. The neighbor’s house is interesting and curiously designed.

The random fragments of backstory are a nice touch.

It’s cartoony, like the game Psychonauts, and it fits the strange tone, but it’s not for me.

Just a lack of polish, overall.

Joy?
In moments, but outweighed by frustration.