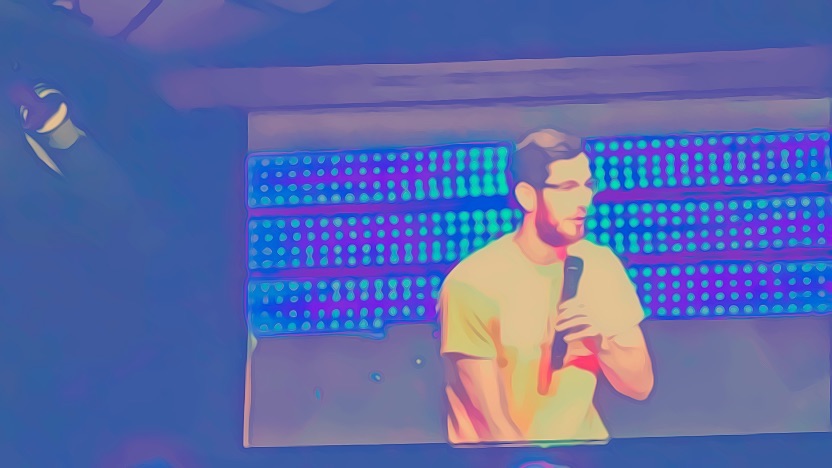 an encounter with Jesus.

On-stage with a few others,
for three straight services,
one Sunday morning,
I roughly spoke the following.

Hi, I’m Matthew Rodriguez and I grew up in Massachusetts in a Christian home; we went to church every Sunday. I didn’t like going to church, but I believed in Jesus. I accepted Jesus into my heart; I had a spiritual experience of his healing touch; I wholly wanted to be righteous – I wasn’t, and I often felt guilt and shame.

Fast forward to college and I fell away from church, and from Jesus. I still believed in God, but my actions told a different story. Fast forward to grad school and I was studying applied physics, and I was exploring the concept of fractal time – cyclic repetition of self similar ages. I stumbled into Vedic literature and loved the philosophy and theology it unveiled. I was hooked. I was back seeking God, and it felt so right. I dove into Hinduism, specifically Bhakti yoga – the yoga of devotion. I became a vegetarian, fasted regularly, practiced mantra meditation, read Vedic literature, and had mystical experiences. I still believed in Jesus, but Krṣṇạ was the God I was devoted to. According to the practice, I began seeking a guru, and found myself following a sect of Bhakti yoga called Gaudiya Vaishnavism.

I wasn’t quite satisfied. I couldn’t fit Jesus in.

And so I wrestled, particularly with the Old Testament God in Jeremiah. I remember praying deeply for Him to show me how He was there, and a few weeks later, while visiting my sister in LA, during worship at a church in Santa Monica, God answered me:

“For I know the plans I have for you, declares the Lord, “plans to prosper you and not to harm you, plans to give you hope and a future”.

Cue the tears, cue the trembling. Cue the rejoicing of my soul. Alas, this passed, but something changed in my heart.

I found myself reading the Bible more; I started looking for a home church; I asked Jesus to be my guru. The next thing I know I’m getting baptized at PAC, and I’m hanging out with other young adults through Immerse (PAC young adults group).

Oh don’t get me wrong, I was still chanting mantras and reading Vedic literature. I still believed in Krṣṇạ. Frankly I was trying to resolve Him with Jesus. But I felt safe. I felt welcome. I began sharing, ever so slowly – so as not to expose my fraudulent Christian values too soon – with many of the familiar faces at Immerse and men’s group. And no one agreed with me, but they listened. And they prayed for me behind the scenes.

Fast forward to summer of last year. I’m on a Thailand mission trip, and let’s just say I was carrying a lot more baggage than any flight would allow. Internally I brought my own conception of God. I was a partially undercover Krṣṇạ devotee trying to resolve him with Jesus. If you know anything about my mafia-game skills, you can probably imagine how incognito I was. Well God saw right through me and into my heart. While being intentional in my prayers, asking Him how He saw Krṣṇạ, He dropped this on me:

There I was, in an unknown country, further from resolving Him with Krṣṇạ but closer to His heart.

And so I began letting go of Krṣṇạ. And I packed away all of my Vedic literature, and my Hindu paraphernalia. I mean, I didn’t exactly believe what Jesus was asking me to believe, but I decided to surrender and see where I would land.

Well around four months ago, I felt like I had landed as a Christ follower. I had read through the whole Bible in a year, and was walking with fellow Christians at Immerse. I really felt the holy spirit moving on many occasions, but some of the more mystical experiences faded. That’s alright. At least my family and friends thought I was more normal again. I no longer had to manage a facade; I could be me. And I began really loving Immerse, as I was falling in love with the people there. With them I felt God’s presence, and that’s good enough for me. Or so I thought…

A few weeks before the Immerse retreat, I passed by a Radha-Krṣṇạ temple while I was driving. This blew my mind, because I searched everywhere for Gaudiya Vaishnavites when I was practicing Bhakti. And so subconsciously, my past began creeping back.

June comes and I’m jazzed. I come alive at retreats. I know God will be there with us, but I’m not expecting too much personally. And bam, God really shows up! Thanks to a dear sister in Christ, who reluctantly listened and courageously shared a verse the holy spirit put on her heart, everyone in the chapel on the last night of the retreat was quote, “zonked by the holy ghost”. You had to be there.

Rewind to earlier that morning. I was talking about Hinduism with a brother in Christ who grew up in a Hindu family. I was actually surprised because I didn’t know the specific name of the god he was telling me about, one who closely relates to Krṣṇạ. So I’m a mess internally, but I’m wearing a mask all day. A few hours before dinner I make my way to the chapel and observe worship rehearsal. Talk about an environment for soul searching! The worship was so genuine and I was so torn. I began reading on my phone about Krṣṇạ in the form I heard about earlier that morning. My mind was racing and my thoughts were at war. After dinner I found myself on the dock by the river. There I surrendered. I prayed hard on that dock. I said to God: women, work, friends, family – I surrender. I trust you. There is nothing to discern.

Krṣṇạ. Hinduism. Vedic thought and culture. I can’t get passed this; not after everything I’ve practiced and experienced and believed. I cannot discern spiritual experience anymore. I’m frustrated. I’m tired of just playing religion. I want you.

I think my heart did most of the praying. I was bleeding out on that dock. And then it was twilight. And the stillness of the river washed over me. I felt peace. I surrendered to Jesus. I prayed, “Ok. I trust you. You always show up in a personal and undeniable way. I’m ready, and I will wait.”

I did not imagine that I would be surrendering myself to Christ again that very night, that I would be recommitting Him into my heart. When our dear sister shared that verse, cue the Holy Spirit and the tears and the joy and the rejoicing…

…I don’t have words. Jesus loves you.

That Saturday, Father’s day, when I returned from the retreat, I packed up all the Vedic literature and devotee paraphernalia. I drove over to the Radha-Krṣṇạ temple and dropped it all off.

Not without struggle. I had to turn back once. I kept justifying keeping some things. One of those things was a Vedic text that I thought highly of, as it is considered the summum bonum of Gaudiya Vaishnavism and Krṣṇạ Consciousness. It comprises 8 verses, or shlokas, with commentary. Years ago I had never gotten passed the 3rd verse as I had been working through them slowly. My curiosity overwhelmed me, I opened the book, and read through the verses.

The eight and final shloka loosely began with the words, “Exclusive devotion to Krṣṇạ…”

Wait. Exclusive? Oh. I can’t have Krṣṇạ and Jesus here either. What am I doing anyway?

It was closure. I could finally let go.

Jesus is more than enough; His grace is sufficient.